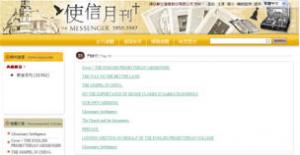 The Presbyterian Messenger is the history of evangelism in Taiwan that recorded the works of Presbyterian Church of England.

The Presbyterian Church of England resolved to establish a mission in China in 1847. Rev. William Chalmers Burns was sent to China in 1847, and he began his missionary service during the late Qing Dynasty in British Hong Kong and went on to preach in such locations as Shantou , Xiamen and Northern Taiwan. From 1881, he was extending his service to Singapore and Malaysia.

The Presbyterian Messenger is translated into “長老教使信” or “使信月刊” in Chinese, recording the history of mission. And it had been changed its title several times :